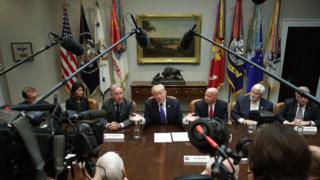 US President Donald Trump is calling for major tax cuts for business in a speech, as a longstanding Republican effort to overhaul the US tax code takes centre stage.

Top Republicans released a framework for the overhaul that includes lowering the tax rate for corporations from 35% to 20%, among other changes.

But many aspects remain unknown.

Republicans are looking for a policy win, after repeated failure to reform US healthcare.

They presented a united front on Wednesday, pledging to make changes while they control both the White House and Congress.

“We’re ready to build on this momentum and help get tax reform across the finish line,” Representative Kevin Brady of Texas said.

Democrats blasted the proposal, saying it would raise the burden on middle-class families, while offering a break for the wealthy.

They also said the cuts would increase the deficit, putting entitlement programmes such as Medicare and Social Security at risk.