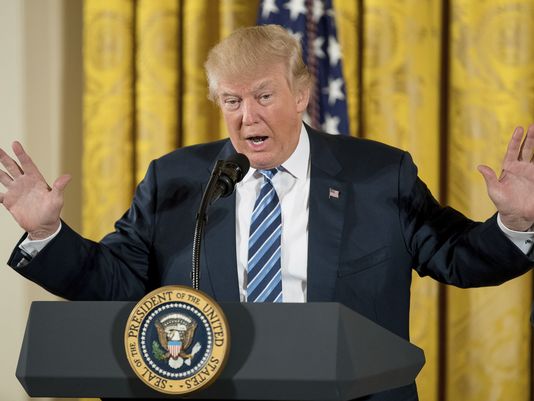 WASHINGTON — President Trump, having declared post-inaugural Monday the true opening day of his new administration, spent Sunday pondering a string of executive orders on topics ranging from immigration to Israel to the economy, including what he called a re-working of the North American Free Trade Agreement.

Supervising the swearing-in of 30 new White House staff members, Trump said he will soon meet with Canadian Prime Minister Justin Trudeau and Mexico President Enrique Pena Nieto to discuss changes to NAFTA, the trade deal he claims has shipped U.S. jobs to those other countries.

“We will start some negotiations having to do with NAFTA. Anyone ever hear of NAFTA? I ran a campaign somewhat based on NAFTA,” he said. “Mexico has been terrific, actually, and the president has been really quite amazing.”

Trump’s public schedule for Monday includes separate meetings with corporate and union leaders, an intelligence briefing, lunch with Vice President Pence, a reception for congressional leaders and a one-on-one meeting with House Speaker Paul Ryan. And in the morning, he’s set aside time to ceremoniously sign executive orders.