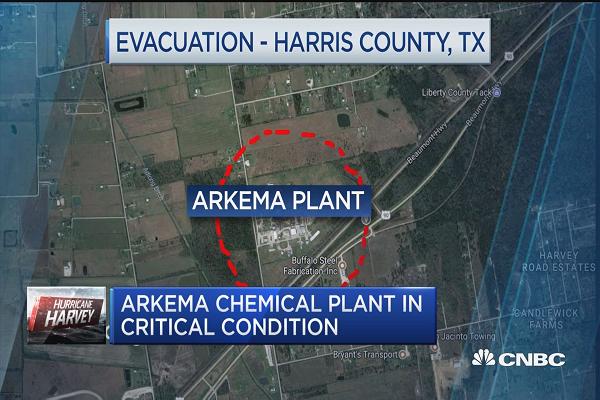 Arkema SA expects chemicals to catch fire or explode at its heavily flooded plant in Crosby, Texas in the coming days, and has no way to prevent that from happening, the chief executive officer of the company’s North America unit said on Wednesday.

The company evacuated remaining workers on Tuesday and Harris County ordered the evacuation of residents in a 1.5-mile radius of the plant that makes organic chemicals.

Richard Rowe, CEO of the North America unit, told reporters that chemicals on the site will catch fire and explode if they are not properly cooled, and that Arkema expects that to happen within the next six days as temperatures rise. He said the company has no way to prevent that because the plant is swamped by about six feet of water.

Rowe said the company was “comfortable” with the size of the evacuation zone.

Rowe did not disclose the volume of chemicals on the site and said it was speculative to predict how much damage the plant could sustain. He said there could be an “intense fire” that would result in significant black smoke but would not pose any “long-term harm or impact.”

Chemicals on site are stored at low temperatures and can catch fire or explode at higher temperatures. The plant lost refrigeration when backup generators were flooded and then workers transferred products from the warehouses into diesel-powered refrigerated containers. The company said some refrigeration of back-up containers has been compromised because of high-water levels and the company is monitoring temperature levels remotely.