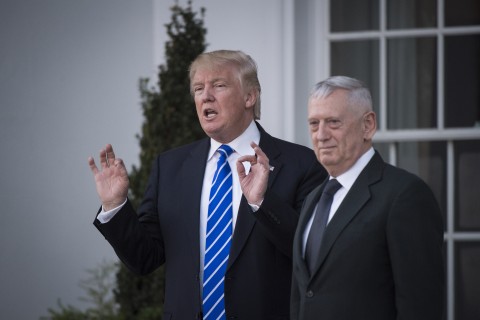 President-elect Donald Trump said Thursday he has chosen retired Marine Gen. James N. Mattis, who has said that responding to “political Islam” is the major security issue facing the United States, to be secretary of defense.

“We are going to appoint Mad Dog Mattis as our secretary of defense,” Trump told a rally in Cincinnati, the first stop on a post-election “thank-you tour.”

Trump joked that the media and audience should keep the news to themselves. “We are going to be announcing him Monday of next week,” Trump said. “Keep it inside the room.”

Mattis, who retired as chief of U.S. Central Command in 2013, has often said that Washington lacks an overall strategy in the Middle East, opting to instead handle issues in an ineffective one-by-one manner.

To take the job, Mattis will need Congress to pass legislation to bypass a federal law stating that defense secretaries must not have been on active duty in the previous seven years. Congress has granted a similar exemption just once, when Gen. George C. Marshall was appointed to the job in 1950.