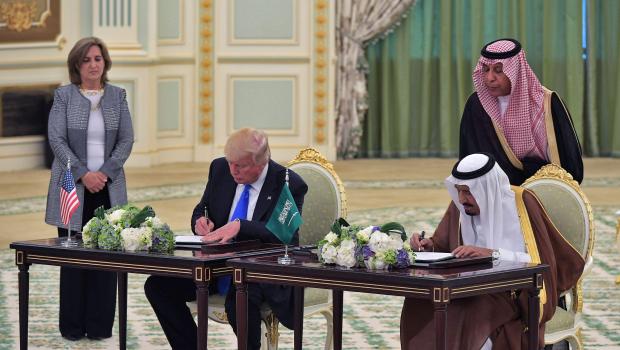 President Trump signed a multi-billion-dollar arms and economic deal with Saudi Arabia Saturday in a move intended to strengthen the U.S.-Saudi Arabian alliance against ISIS on the president’s first foreign trip.

The agreement is worth $110 billion effective immediately and $350 billion over 10 years, in an effort to equip Saudi Arabia and Persian Gulf partners in the fight against ISIS. The agreement will provide fighter jets, tanks, combat ships and anti-missile defense systems and create defense-sector jobs in the U.S., according to the White House. The deal includes additional private-sector agreements and a joint vision statement with Saudi Arabia, one of the world’s largest oil producers.

“That was a tremendous day,” Mr. Trump told reporters. “Tremendous investments in the United States.”

“Hundreds of billions of dollars of investments into the United States and jobs, jobs, jobs.” he continued.

President Trump is expected to address ways to combat terrorism during a two-day stop in Saudi Arabia. Mr. Trump and the first lady’s arrival in …

The agreement signals a strengthening relationship between the U.S. and Saudi Arabia, and distances the U.S. from Iran, Saudi Arabia’s adversary. Mr. Trump is reportedly preparing to announce his support for an “Arab NATO” to counter a growing Iranian influence in the region.