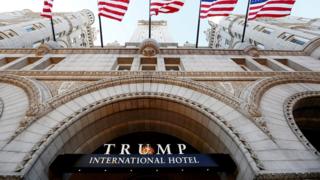 Officials in Maryland and Washington DC are suing Donald Trump for accepting payments from foreign governments via his business empire.

The lawsuit cites the US constitution’s emoluments clause, which says no federal official should receive a gift or a fee from a foreign government.

The suit – which is the first of its kind filed by government entities – claims Mr Trump is “flagrantly violating the constitution”.

The White House has denied the claims.

The attorneys general for the District of Columbia and Marlyand, Karl Racine and Brian Frosh, announced the lawsuit on Monday.

“Never in the history of this country have we had a president with these kinds of extensive business entanglements or a president who refused to adequately distance himself from their holdings,” said Mr Racine.

The constitutional challenges to Donald Trump’s ongoing business ties as president just got some state-level muscle behind them.

While the lawsuit by the District of Columbia and Maryland isn’t the first attempt to force the president to more fully separate himself from his real-estate empire, the two governments bring a new level of legitimacy and resources.