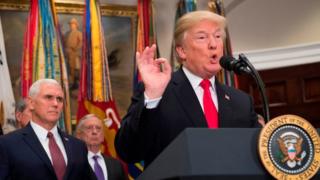 The editorial board of USA Today has said President Donald Trump is “unfit to clean the toilets” in Barack Obama’s library or shine George W Bush’s shoes.

The scathing editorial comes after Mr Trump claimed a female senator “would do anything” for campaign cash – words which some regarded as sexual innuendo.

“Rock bottom is no impediment for a president who can always find room for a new low,” the newspaper added.

USA Today is not known for publishing such blistering editorials.

One of the nation’s highest-circulated newspapers, it usually includes an “opposing view” column with each opinion piece.

But during the 2016 election, the newspaper broke its tradition of not endorsing a presidential candidate by publishing an editorial outlining why, it argued, Mr Trump was “unfit for the presidency”.