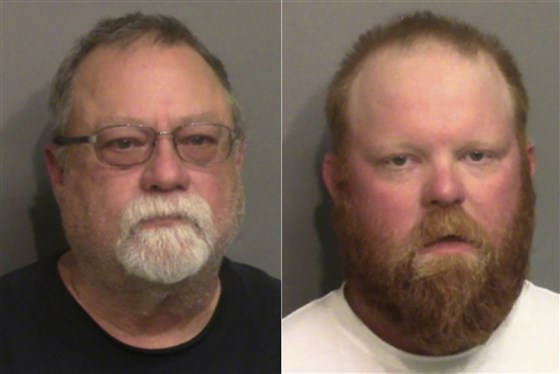 A white man and his son who are accused of killing an unarmed black man in Georgia in February have been arrested after video of the incident sparked widespread outrage.

Gregory McMichael, 64, and Travis McMichael, 34, were arrested in the death of Ahmaud Arbery, the Georgia Bureau of Investigation announced. Both men face charges of aggravated assault and murder.

Arbery, 25, was shot to death in Brunswick, a coastal city about midway between Savannah, Georgia, and Jacksonville, Florida, on Feb. 23 as he was running through the Satilla Shores neighborhood. His family says he was out jogging, while the McMichaels claimed that they thought he was a burglar.

Video released Tuesday by attorneys for Arbery’s family appears to show an altercation between a group of men before what is alleged to be the fatal shooting.

According to a Glynn County police report, Gregory McMichael first spotted Arbery on foot “hauling ass” down Satilla Drive and immediately thought he was a burglar who had recently been targeting the neighborhood.

Gregory McMichael armed himself with a .357 Magnum, and his son grabbed a shotgun. They jumped into their pickup truck and chased Arbery. Police said a third man, identified as a neighbor, joined the chase and jumped into the McMichaels’ truck.