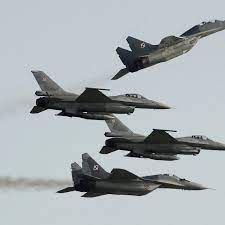 The U.S. is pushing a deal for Poland to send fighter jets to Ukraine, despite Moscow warning that countries that host warplanes for Kyiv could be drawn into the conflict.

It comes after President Volodymyr Zelensky of Ukraine issued an impassioned plea to U.S. lawmakers at the weekend to help his country get more jets to fight Russia’s invasion.

The deal would involve Poland transferring its Soviet-era MiG-29 planes, which Ukrainian pilots are trained to fly, to Ukraine, while the U.S. is in discussions to backfill Poland’s fleet with American-made F-16s.