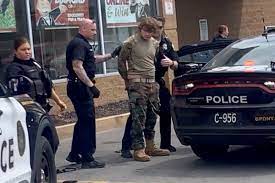 A teenaged gunman who allegedly murdered 10 people at a Buffalo supermarket planned the attack for months before he drove for three hours to carry out the vile ambush that was allegedly motivated by the white supremacist’s hated of black people.

Payton Gendron, 18, of Conklin, NY, pleaded not guilty to first-degree murder following Saturday’s attack. He is being held without bail and faces life in prison. Gendron is due back in court on Thursday.

Police say the rambling text of a 180-page manifesto that Gendron posted before going on his rampage, included a plan of the attack which detailed driving several counties away to carry out the shooting at the Tops Friendly Market.