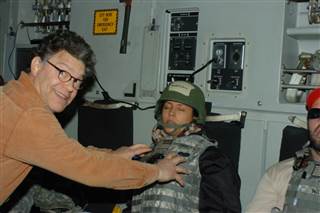 Facing a string of sexual misconduct allegations and mounting pressure from fellow Democrats, Sen. Al Franken announced Thursday he will leave office in the coming weeks. But Franken, a former comedian, didn’t go down without taking some scathing parting shots at President Donald Trump and Republicans who have been accused of similar actions.

“I, of all people, am aware that there is some irony that I am leaving while a man who has bragged on tape about his history of sexual assault sits in the Oval Office, and a man who has preyed on underage girls is running for the Senate with the full support of his party,” Franken, D-Minn., said in emotional speech on the Senate floor.

“Today, I am announcing that in the coming weeks, I will be resigning as a member of the United States Senate,” Franken said, the day after Democratic women led the charge of 35 Democratic senators who called on their embattled colleague to step down. It was also days after Rep. John Conyers, a Michigan Democrat who was also accused of sexual misconduct, resigned under pressure.