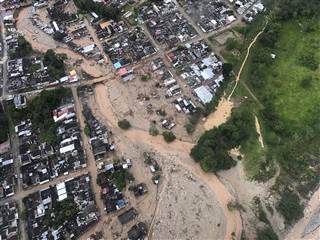 BOGOTA, Colombia — An avalanche of water from three overflowing rivers tore through a small city in Colombia while people slept, destroying homes, sweeping away cars and killing at least 193 unsuspecting residents.

The incident triggered by a sudden, heavy rainstorm happened around midnight in Mocoa, a provincial capital of about 40,000 tucked between mountains near Colombia’s southern border with Ecuador.

Muddy water quickly surged through the city’s streets, toppling homes, ripping trees from their roots and carrying a torrent of rocks and debris downstream. Many residents did not have enough time to flee.

According to the Red Cross, 202 people were injured and 220 believed missing. President Juan Manuel Santos declared a state of emergency on Saturday and said the death toll will likely rise but warned against speculating how many are dead.

“We don’t know how many there are going to be,” he said of the fatalities when he arrived at the disaster zone to oversee rescue efforts. “We’re still looking.”

Eduardo Vargas, 29, was asleep with his wife and 7-month-old baby when he was awoken by the sound of neighbors banging on his door. He quickly grabbed his family and fled up a small mountain amid the cries of people in panic.

“There was no time for anything,” he said.