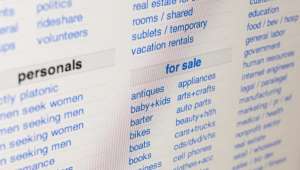 The service announced Friday it will no longer operate the portion of its website that allows individuals to seek encounters with strangers.

The legislation, now awaiting President Donald Trump’s signature, would create an exception to Section 230 of the 1996 Communications Decency Act, which would pave the way for victims of sex trafficking to sue websites that facilitate their abuse.

The House version already passed with overwhelming support and received an endorsement from the White House.

Section 230 of the Communications Decency Act is a legal protection that gives a broad layer of immunity to online companies from being held liable for user-generated content.