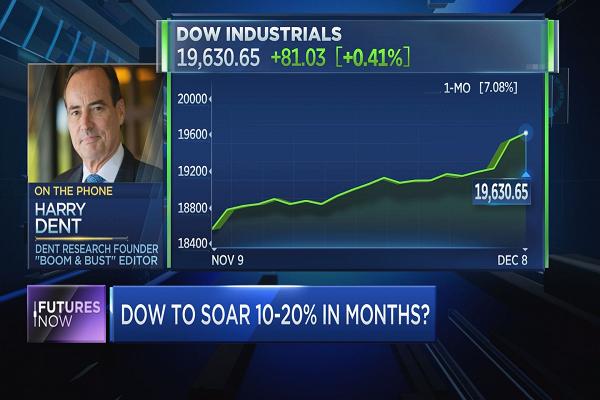 He’s a market watcher known for making bold calls spanning decades. Now, Harry Dent is arguing that the Trump rally is setting investors up for an inevitable stock market crash.

Investors have embraced the prospect of President-elect Donald Trump’s victory by sending stocks on a tear to new record highs. Dent, however, thinks there’s trouble brewing.

“I think this is going to be a stock market peak of a lifetime followed by a crash very similar to the early 1930s. This happens once in a lifetime,” Dent Research Founder Harry Dent recently told CNBC’s “Futures Now.”

Since Trump won the presidential election, the Dow is up eight percent and has closed in record high territory 14 times. Financials have soared 19 percent, and 10-year treasury yields have been rallying— they’re now at 2.47 percent.

“You can’t have stocks keep going up at this rate when earnings are going nowhere,” said Dent. “”I think it [Dow] is going to end up between 3000 and 5000 a couple years from now.”