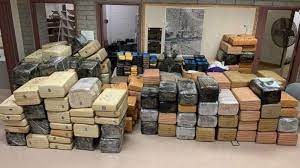 U.S. Customs and Border Protection (CBP) intercepted nearly $2 million in drugs at the southern border over the course of the past week.

Most of the seizures were made at ports of entry into the U.S. from Mexico, where Customs agents inspect inbound vehicles. The drugs seized included cocaine, methamphetamine, and marijuana.

CBP has seized the highest amount of methamphetamine at the southern border in fiscal year 2022 compared to other drugs so far, with 84,500 pounds confiscated.