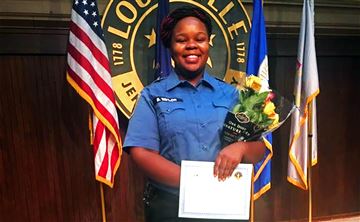 One of three Kentucky police officers involved in the killing of Breonna Taylor this year was fired Tuesday, authorities said.

“These rounds created a substantial danger of death and serious injury to Breonna Taylor and the three occupants of the apartment next to Ms. Taylor’s,” he said.

Schroeder added that Hankison fired those rounds without knowing if that deadly force was directed at someone who posed an immediate threat.