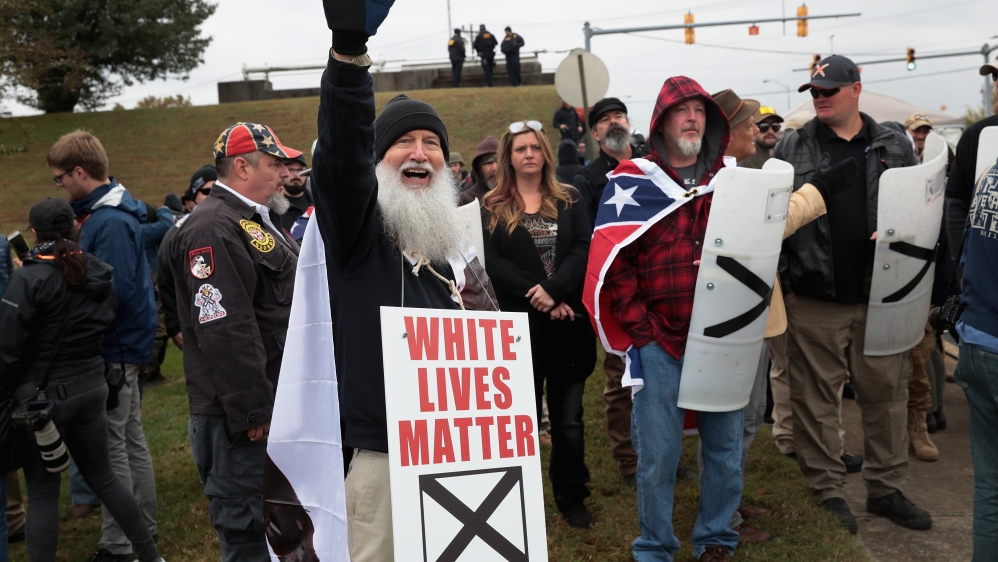 The “Unite the Right” rally in Charlottesville and the killing of Heyer prompted a widespread public backlash against the alt-right, a loosely-knit coalition of white supremacists, white nationalists and neo-Nazis who advocate a white ethnostate.

Among those who shared Schoep’s narrative of the events in Charlottesville was right-wing US President Donald Trump, who claimed deemed anti-fascists and other counterprotesters as the “alt-left”.

Attributing blame to “both sides”, Trump said at the time that counterdemonstrators were “swinging clubs” as they “came charging at” the far-right groups.

Trump’s comments met widespread criticism from many on both sides of the political spectrum.

Earlier this month, white supremacist Richard Spencer, a leading figure in the alt-right, held a speech at the University of Florida in Gainesville.

Three of Spencer’s supporters who travelled from Texas to Gainesville were arrested and charged with attempted homicide after one of them fired a gun in the direction of anti-racist protesters. No one was injured in that incident.

Mark Bray, author of Antifa: The Anti-Fascist Handbook, argued that “it certainly seems” that the Trump administration and mainstream political establishment have focused their efforts on cracking down on anti-fascists and anti-racist activists.

Bray alluded to the Department of Homeland Security’s recent decision to cut funds for organisations that combat right-wing violence and hundreds of anti-fascists facing felony charges for their role in protests during Trump’s January 20 inauguration.

“If you look at the fact that the Trump administration pulled back resources to investigate white supremacist violence, if you look at its dog-whistling and kind of more overt sympathies to the far right, if you look at charges from [January 20] and elsewhere … the establishment is generally more concerned about the left than the right,” he told Al Jazeera.