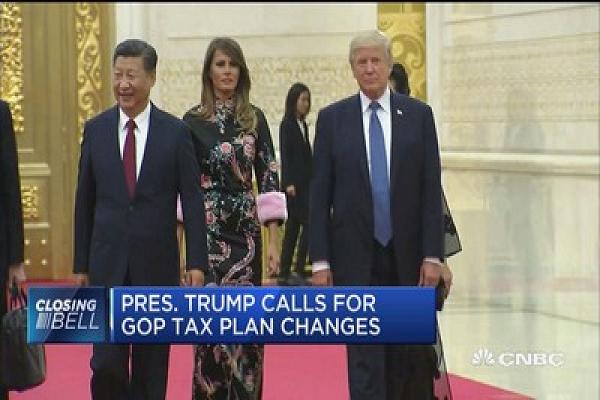 The president on Monday called for major changes to the tax plans currently working their way through Congress. In a tweet sent while he was in Asia, Trump said he is “proud” of lawmakers for getting “close” to approving a tax bill but added that he wants to see more tweaks.

He urged Republicans to repeal the Affordable Care Act provision requiring most Americans to buy insurance or pay a penalty. By doing so, the GOP could then chop the top individual income tax rate to 35 percent with “all the rest going to middle income cuts,” the president contended.

Trump tweet: I am proud of the Rep. House & Senate for working so hard on cutting taxes {& reform.} We’re getting close! Now, how about ending the unfair & highly unpopular Indiv Mandate in OCare & reducing taxes even further? Cut top rate to 35% w/all of the rest going to middle income cuts?

Trump’s tweet adds confusion to an already complicated and contentious process to overhaul the tax system. Lawmakers aim to balance raising revenue to pay for major tax cuts without losing GOP votes and endangering the bill.

Average health insurance premiums are also expected to rise without the individual mandate.