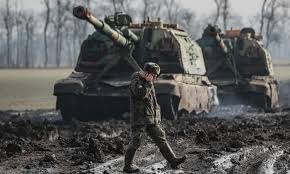 Russian forces invaded Ukraine on Thursday by land, air and sea in the largest military attack of one state against another on the European continent since the Second World War.

The wide-ranging attack on Ukraine on Thursday hit cities and bases with airstrikes or shelling, as civilians piled into trains and cars to flee. Ukraine’s government said Russian tanks and troops rolled across the border in a “full-scale war” that could rewrite the geopolitical order.

Ukraine Foreign Minister Dmytro Kuleba said the country severed diplomatic relations with Russia and called “on all our partners to do the same. By this concrete step you will demonstrate that you stand by Ukraine and categorically reject the most blatant act of aggression in Europe since WWII.”