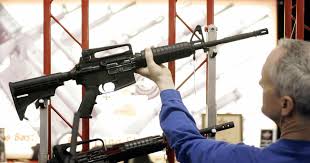 Neither man had experience in the firearms business. They’d worked for years at a security company on Long Island. After developing the entrepreneurial itch, they explored going into organic cosmetics before settling on firearms. Soon, they learned the real money was in manufacturing, Newman recalls.

The gun that buyers wanted more than any other was the type that the Sandy Hook shooter used to murder 20 children and six adults on Dec. 14, 2012: the AR-15-style semiautomatic rifle.