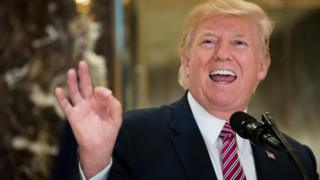 President Trump has said he is scrapping two business councils after more bosses quit over his handling of violent clashes in Virginia.

Business leaders left the White House manufacturing council after the backlash against how he reacted to the far-right rally last weekend.

The clashes culminated in a woman’s death and nearly 20 wounded when a car ploughed into a crowd.

Mr Trump said the manufacturing and strategy forums would be disbanded.

The decision comes as the heads of post-it maker 3M, Campbell Soup, Johnson & Johnson, and United Technologies announced their resignations on Wednesday.

Mr Trump said on Twitter: “Rather than putting pressure on the businesspeople of the Manufacturing Council & Strategy & Policy Forum, I am ending both.”

Before Mr Trump’s announcement, the Strategy and Policy Forum announced it was a joint decision to disband the council.

“We believe the debate over forum participation has become a distraction from our well-intentioned and sincere desire to aid vital policy discussions on how to improve the lives of everyday Americans,’ the group’s statement read.