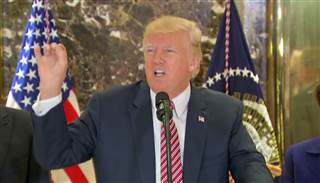 WASHINGTON — President Donald Trump told reporters Tuesday that the counter-protesters demonstrating against white nationalism were also to blame for the violence at race-fueled riots in Charlottesville, Virginia over the weekend.

He also said the statue of Confederate Gen. Robert E. Lee in Charlottesville was “very important” to the people who participated in the march, and asked whether opponents of such monuments were also prepared to take down statues to George Washington and Thomas Jefferson because they, too, owned slaves.

His remarks double down on his remarks Saturday, threatening to undo any good will the president received by denouncing the Ku Klux Klan and neo-Nazis in a statement at the White House on Monday. The president was criticized for what many, including politicians on both sides of the aisle, saw as an initially tepid response in which he said “many sides” were to blame for the violence that killed one woman and injured 19 other people.

Trump said Tuesday that he “wanted to know the facts” before condemning the white nationalists.