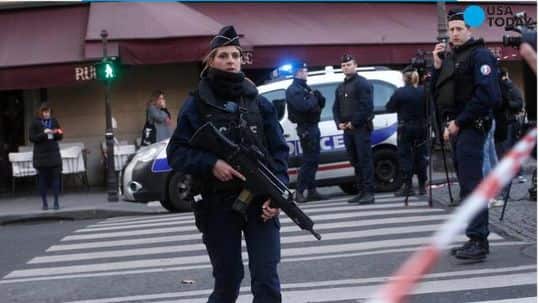 PARIS — French soldiers opened fire on a man wielding a machete who shouted “Allahu akbar” as he attacked them near the Louvre museum in Paris on Friday. The attacker was seriously wounded and has been hospitalized.

The incident happened at the Carrousel du Louvre, an underground shopping center that connects to the museum. The world-famous Louvre is home to Leonardo da Vinci’s Mona Lisa. It wasn’t immediately clear if any tourists were at the scene of the attack at the time.

Yves Lefebvre, a police union official, said the attacker, who was carrying two backpacks and two machetes, attacked a soldier when he was told that he couldn’t bring his bags into the mall.

“That’s when he got the knife out and that’s when he tried to stab the soldier,” Lefebvre said, according to the Associated Press.

Prosecutor Francois Molins says the male attacker is believed to be a 29-year-old Egyptian who was living in the United Arab Emirates, but his identity has not been formally confirmed yet. Molins added that the attacker is in a life-threatening condition in a hospital, the AP reported.