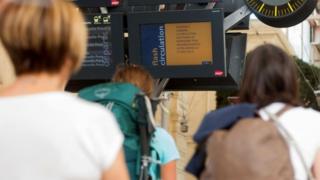 Two US tourists have had hydrochloric acid thrown in their faces at Marseille train station, French media say.

The victims in their early 20s have been taken to hospital for treatment, La Provence newspaper reported.

Two other members of their group were also attacked at Saint-Charles station, but did not get acid in their faces.

The incident is not believed to be terror-related. The attacker, described by police as a mentally unstable 41-year-old woman, has been arrested.

The report says she remained at the site after the attack, and showed photographs of herself with burns.