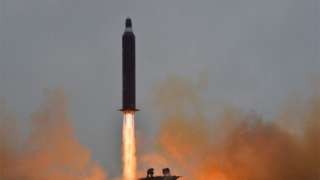 South Korea and US officials said the missile, launched on Saturday night, flew east towards the Sea of Japan for about 500km (300 miles).

South Korea’s defence ministry called it an armed provocation to test the response of US President Donald Trump.

Japan’s Prime Minister Shinzo Abe, standing next to Mr Trump on a visit to the United States, said the test was “absolutely intolerable”.

Nato also condemned the missile test, with Secretary General Jens Stoltenberg urging North Korea “not to raise tensions further and to re-engage in a credible and meaningful dialogue with the international community”.

The European Union joined the criticism, declaring in a statement that North Korea’s “repeated disregard of its international obligations is provocative and unacceptable”.

As for the US, Mr Trump said on Saturday: “America stands behind Japan, its great ally, 100%.”