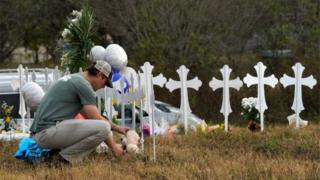 US President Donald Trump has said that “hundreds more” would have died in a Texas church mass shooting if US gun laws were more stringent.

He told reporters in Seoul that such measures would have “made no difference” in Sunday’s attack, which left 26 people dead and 20 injured.

Gunman Devin Patrick Kelley was found dead in his car after he fled the scene and was chased by armed bystanders.

The US Air Force said he should have been legally barred from owning guns.

Mr Trump was asked during a visit in Seoul on Tuesday if his call for “extreme vetting” of immigrants should also apply to Americans who want to purchase a gun.

“If you did what you’re suggesting, there would have been no difference three days ago.” he said, referring to the attack, during a joint press conference with South Korean President Moon Jae-in.