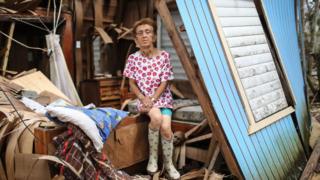 In tweets, he accused Puerto Rico of a “total lack of accountability”, adding that “electric and all infrastructure was disaster before hurricanes”.

The island, whose 3.4 million residents are US citizens, is 90% without power, some three weeks after Hurricane Maria.

Congress is weighing a multi-billion dollar aid package for the territory.

In Thursday’s tweets, the US president noted it was up to “Congress to decide how much to spend”.

But he added: “We cannot keep FEMA, the Military & the First Responders, who have been amazing (under the most difficult circumstances) in P.R. forever!”