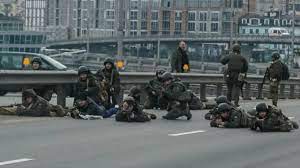 The government is calling on the people of Kyiv to do everything it can to resist Russian troops, including making Molotov cocktails and taking up arms.