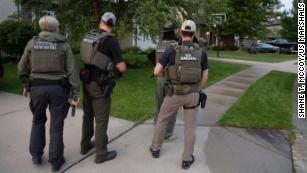 The US Marshals Service led a multiagency effort dubbed “Operation Dunder Mifflin” to verify the addresses of registered sex offenders living in the area of Scranton, Pennsylvania.

The operation was presumably named in honor of the hit sitcom “The Office,” which takes place at a fictional paper company named Dunder Mifflin in Scranton.

Despite the operation’s name, the mission was serious.

Between August 2 to September 17, US Marshals coordinated with the Scranton Police Department to verify the home addresses of 219 convicted and registered sex offenders living in the area, US Marshals said in a news release on Monday.

Of the offenders, 13 were found to be in violation of sex offender registration laws, nine were arrested and four are still being sought for violations, the release said.

Eight of the arrested offenders were men and one was a woman, all between 22 to 48 years old. The individuals were convicted of a range of crimes, including indecent assault, sexual abuse of children, statutory rape, corruption of minors, sexual abuse, and involuntary deviate sexual intercourse.

back the blue, Crime, us marshals