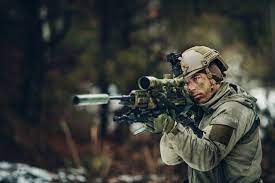 A Canadian soldier known as “one of the world’s deadliest” snipers left his computer programmer job, his wife and year-old son to cross the Ukrainian border at night and fight Russian invaders alongside other foreign volunteers, according to the Canadian Broadcasting Corporation (CBC).

Capable of killing a person with a rifle from over 2 miles away, the 40-year-old soldier—identified only by his nom de guerre “Wali” (in order to protect his family’s safety)—is now one of the over 20,000 foreign-born fighters who answered Ukrainian President Volodymyr Zelensky’s call to fight Russian troops.