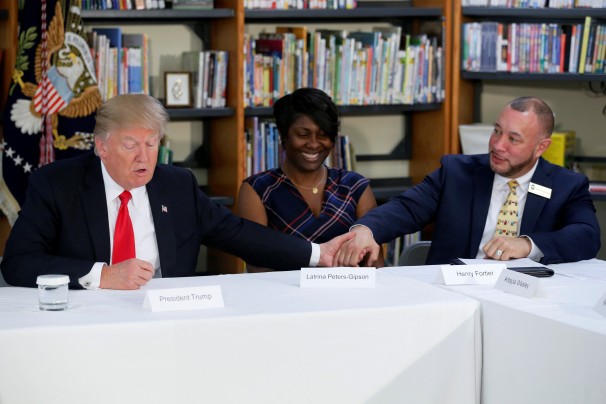 Tens of thousands of immigrants detained by U.S. Immigration and Customs Enforcement were forced to work for $1 day, or for nothing at all — a violation of federal anti-slavery laws — a lawsuit claims.

The lawsuit, filed in 2014 against one of the largest private prison companies in the country, reached class-action status this week after a federal judge’s ruling. That means the case could involve as many as 60,000 immigrants who have been detained.

It’s the first time a class-action lawsuit accusing a private U.S. prison company of forced labor has been allowed to move forward.

“That’s obviously a big deal; it’s recognizing the possibility that a government contractor could be engaging in forced labor,” said Nina DiSalvo, executive director of Towards Justice, a Colorado-based nonprofit group that represents low-wage workers, including undocumented immigrants. “Certification of the class is perhaps the only mechanism by which these vulnerable individuals who were dispersed across the country and across the world would ever be able to vindicate their rights.”

At the heart of the dispute is the Denver Contract Detention Facility, a 1,500-bed center in Aurora, Colo., owned and operated by GEO Group under a contract with ICE. The Florida-based corporation runs facilities to house immigrants who are awaiting their turn in court.

The lawsuit, filed against GEO Group on behalf of nine immigrants, initially sought more than $5 million in damages. Attorneys expect the damages to grow substantially given the case’s new class-action status.

The lead plaintiff in the case is a permanent resident of the U.S., and attorneys expect “a significant portion of the class will fit that bill,” Free said.