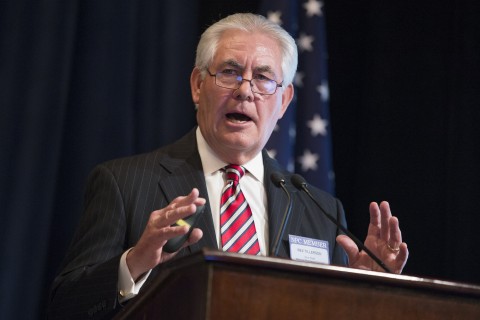 President-elect Donald Trump has picked as his secretary of state Rex Tillerson, the chief executive of ExxonMobil, Trump’s transition team announced Tuesday, setting up a possible confrontation with members of his own party in the Senate.

Since Tillerson’s name emerged as a candidate for the post, leading Republicans have expressed reservations about his years of work in Russia and the Middle East on behalf of the multinational oil company. But some lawmakers seemed to be signaling they will support him after the announcement was made.

Also under scrutiny is Tillerson’s ties with Russian President Vladi­mir Putin amid wider probes of Russian influence following a CIA assessment pointing to Russian computer hacking during the presidential race.

After Tillerson’s nomination was official, several Republican senators offered various degrees of support, led by Senate Majority Leader Mitch McConnell (R-Ky.). He said in a statement: “I look forward to supporting his nomination.”

Other GOP senators, including Jeff Flake (Ariz.), who sits on the Senate Foreign Relations Committee that will first have to approve Tillerson before a Senate floor vote, said that backing for Tillerson from some prominent figures — former secretaries of state James Baker and Condoleezza Rice, and former defense secretary Robert M. Gates — “carry considerable weight.”