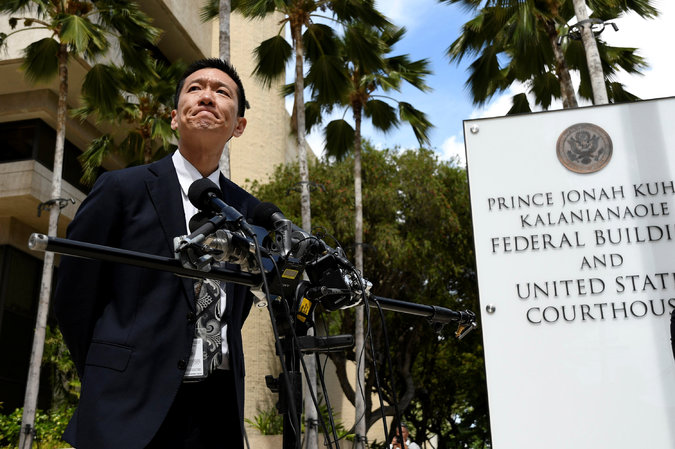 In Maryland, Judge Theodore D. Chuang echoed that conclusion hours later, ruling in a case brought by nonprofit groups that work with refugees and immigrants, that the likely purpose of the executive order was “the effectuation of the proposed Muslim ban” that Mr. Trump pledged to enact as a presidential candidate.

Mr. Trump lashed out at Judge Watson during a campaign-style rally in Nashville late on Wednesday. Raising his voice to a hoarse shout, Mr. Trump accused the judge of ruling “for political reasons” and criticized the United States Court of Appeals for the Ninth Circuit, which upheld the earlier decision against his administration and will hear any appeal to the Hawaii ruling.

“This ruling makes us look weak, which by the way we no longer are, believe me,” Mr. Trump said, to mounting cheers from a loyal crowd.

Mr. Trump even said he might reissue the initial version of the order, rather than the one blocked on Wednesday, which he described as “a watered-down version of the first one.”

After he signed the revised ban, Democratic attorneys general and nonprofit groups that work with immigrants and refugees raced back into court, claiming that Mr. Trump’s updated decree was still a thinly veiled version of the ban on Muslim migration that he proposed last year.

Judge Watson, who was appointed by President Barack Obama, ruled that the State of Hawaii and an individual plaintiff, Ismail Elshikh, the imam of the Muslim Association of Hawaii, had reasonable grounds to challenge the order as religious discrimination. And he concluded that allowing the travel restrictions to go into effect at midnight, as scheduled, could have caused them irreparable harm.

“For instance, there is nothing ‘veiled’ about this press release,” Judge Watson wrote, quoting a Trump campaign document titled ” Donald J. Trump is calling for a total and complete shutdown of Muslims entering the United States.”