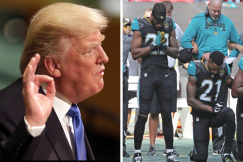 On a day full of criticism from Donald Trump, political protests, linked arms, players taking a knee or not coming on the field at all during the national anthem, and renewed pleas for unity from the league, NBC and the NFL took a ratings hit on Sunday Night Football.

In metered market numbers, the primetime matchup that saw the Washington Redskins beat the Oakland Raiders 27-10  snared an 11.6/20, the worst SNF has performed this season so far. It’s an 8% dip from the early numbers of last week’s game, Atlanta’s 34-23 win over Green Bay. Amid cheers and boos from fans at FedEx Field in Maryland last night, the third week of the SNF  season declined 10% from early numbers of the comparable game of last year on September 25, 2016.

Sunday’s SNF peaked with a 12.r5/20 during the second quarter from 9-9:30 PM ET. Still, NFL ratings are down double-digits this season so far after taking a similar tackle-for-loss last year.

These SNF numbers come on top of a tense Sunday that saw games across the nation under a new spotlight: how would teams respond to Trump’s blasts of Friday at a speech in Alabama and on social media. Started by currently unemployed quarterback and then San Francisco 49er Colin Kaepernick more than a year ago, several NFL players have been publicly protesting police brutality and racial injustice by not standing for the national anthem

It was a move the ex-Celebrity Apprentice host and football fan Trump decried, though the ever-ratings conscious POTUS later said in a tweet Sunday that linking arms was OK.