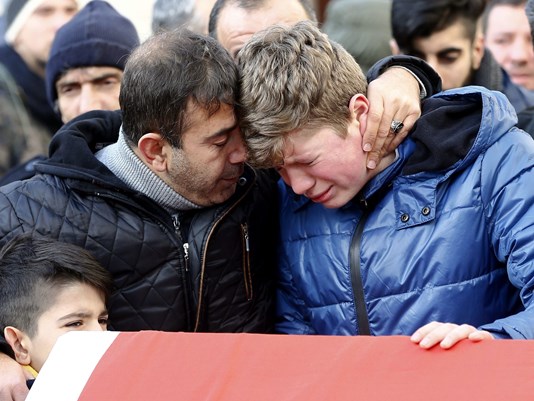 Authorities in Turkey searched Sunday for a gunman who opened fire at a packed nightclub during New Year’s celebrations in Istanbul, killing at least 39 people and injuring 69.

President Recep Tayyip Erdogan condemned “the terror attack in Istanbul’s Ortakoy neighborhood in the first hours of 2017” and offered condolences for those who died, including “foreign guests.”

Interior Minister Suleyman Soylu said the suspect has not been identified and remains at large. He described the attack as a “massacre, a truly inhumane savagery.”

“Our security forces have started the necessary operations. God willing, he will be caught in a short period of time,” Soylu said.

More than 500 people were inside the Reina club when the attack began about 1:15 a.m. local time. A closed-circuit television recording of the attack showed the assailant wearing a Santa Claus hat part of the time, according to the Associated Press, which obtained the recording from the Haberturk newspaper.