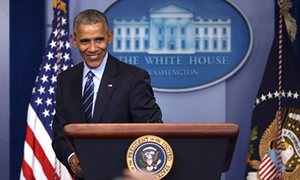 Barack Obama on Sunday used Twitter, a medium notoriously favoured by the man who will succeed him in the White House, to tout his achievements in office.

“As we look ahead to the future,” Obama wrote in his first tweet, “I wanted to take a moment to look back on the remarkable progress that you made possible these past [eight] years.”

From 20 January and for the next four years, barring unforeseen circumstances, Obama’s place in the Oval Office will be taken by the businessman Donald Trump.

On Sunday Trump’s incoming White House press secretary, Sean Spicer, told ABC’s This Week the president-elect would continue to use Twitter to announce policy and make comment on current events.

The medium, he said, was a way to avoid mainstream media outlets and get his message directly to the American public.

Despite widespread concern over the flagrant provocation and outright disregard for protocol displayed by many of Trump’s tweets, Spicer said: “You know what? The fact of the matter is that when he tweets, he gets results.”