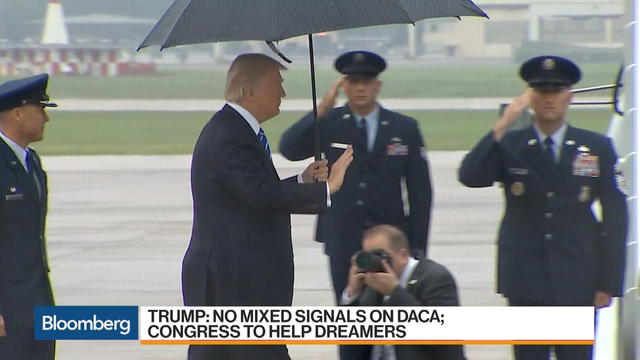 President Donald Trump sided with Democrats on adding a three-month extension of the U.S. debt limit and government spending to a hurricane-relief bill over the arguments of fellow Republicans, who pressed for a longer debt extension.

Senate Republicans released a new version of a Harvey aid bill late Wednesday that includes the debt ceiling extension and would fund the government through Dec. 8. It also nearly doubles the total disaster funding to $15.25 billion from what the House passed earlier in the day. The additional funding would go toward the Community Development Block Grant program to address housing needs in disaster zones.

Trump, after meeting with congressional leaders Wednesday at the White House, told reporters on Air Force One that the deal with Democrats would be “very good.”

“We agreed to a three-month extension on debt ceiling, which they consider to be sacred — very important — always we’ll agree on debt ceiling automatically because of the importance of it,” the president said.

Senate Majority Leader Mitch McConnell told reporters he’ll add the spending and debt-limit extensions to the Hurricane Harvey relief package passed by the House earlier in the day. He said he will support the measure.

“The president agreed with Senator Schumer and Congresswoman Pelosi to do a three-month CR and debt ceiling until December,” said McConnell, a Kentucky Republican. “His feeling was that we needed to come together to not create a picture of divisiveness at a time of genuine national crisis.” CR is shorthand for a stopgap government spending bill.