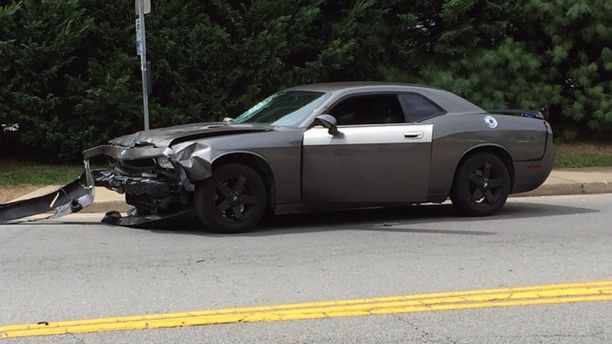 At least one person was killed and 19 others were injured Saturday when a car rammed into a group of counter-protesters during the “Unite the Right” rally in Charlottesville, Va.

Charlottesville Mayor Mike Signer tweeted that he was “heartbroken that a life has been lost here” and urged “all people of good will [to] go home.”

Virginia Secretary of Public Safety Brian Moran told the Associated Press that the driver of the car, a man, was in custody. Moran did not provide the driver’s name.

Matt Korbon, a 22-year-old University of Virginia student, told the Associated Press several hundred counter-protesters were marching when “suddenly there was just this tire screeching sound.” A silver Dodge Challenger smashed into another car, then backed up, barreling through “a sea of people.”

The impact hurled people into the air. Those left standing scattered, screaming and running for safety in different directions.

The crash occurred approximately two hours after clashes in which hundreds of people scramed, chanted, threw punches, hurled water bottles and unleashed chemical sprays on each other ahead of the scheduled noon demonstration.