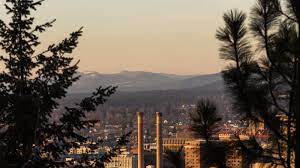 Maybe it was the date night when he and his wife spent two hours driving 19 miles to dinner, or the homeless encampment down the street, or the fact that homes were so expensive that his children could never afford to live near him.

Whatever the reasons, and there were many, Steve MacDonald decided he was done with Los Angeles. He wanted a city that was smaller and cheaper, big enough that he could find a decent restaurant but not so much that its problems felt unsolvable and every little task like an odyssey. After the pandemic hit and he and his wife went through a grand reprioritizing, they centered on Spokane, where their son went to college. They had always liked visiting and decided it would be a nice place to move.

Eastern Washington was of course much colder. Until this winter, Mr. MacDonald, a native Southern Californian, had never shoveled snow. But their new house is twice as big as their Los Angeles home, cost less than half as much and is a five-minute commute from City Hall, where Mr. MacDonald works as Spokane’s director of community and economic development.