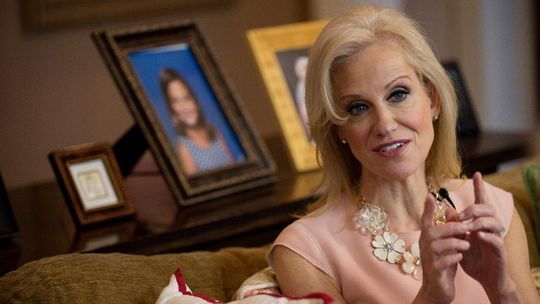 ALPINE, N.J. — The White House is offering yet another wrinkle in its attempt to support President Trump’s allegation — unfounded, so far — that his campaign headquarters in Manhattan was wiretapped by the Obama administration. The latest comes from Trump’s senior counselor Kellyanne Conway.

She says the “surveillance” may be broader than even Trump suggested.

In a wide-ranging interview Sunday at her home in Alpine, where she lives with her husband — a possible nominee for U.S. solicitor general — and their four children, Conway, who managed Trump’s presidential campaign before taking the job as one of the president’s closest advisers, suggested that the alleged monitoring of activities at Trump’s campaign headquarters at Trump Tower in Manhattan may have involved far more than wiretapping.

“What I can say is there are many ways to surveil each other,” Conway said as the Trump presidency marked its 50th day in office during the weekend. “You can surveil someone through their phones, certainly through their television sets — any number of ways.”