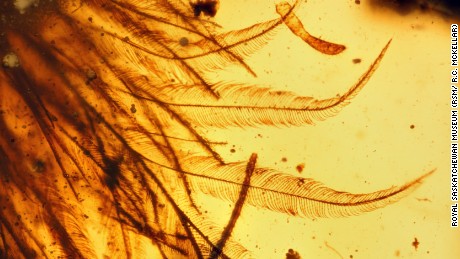 The tail of a 99-million-year-old dinosaur has been found entombed in amber, an unprecedented discovery that has blown away scientists.

Xing Lida, a Chinese paleontologist found the specimen, the size of a dried apricot, at an amber market in northern Myanmar near the Chinese border.

The remarkable piece was destined to end up as a curiosity or piece of jewelry, with Burmese traders believing a plant fragment was trapped inside.

“I realized that the content was a vertebrate, probably theropod, rather than any plant,” Xing told CNN.

“I was not sure that (the trader) really understood how important this specimen was, but he did not raise the price.”