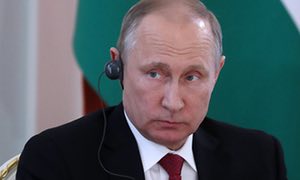 Vladimir Putin has given his broadest hint yet that Russia may have played a role in the hacking of western elections but emphatically denied that his government was involved.

Speaking at the St Petersburg economic forum, the Russian president acknowledged that it was “theoretically possible” that “patriotic” Moscow hackers might have interfered in foreign polls.

Asked on Thursday if Russia would meddle in Germany’s election later this year, Putin said: “If [hackers] are patriotically minded, they start to make their own contribution to what they believe is the good fight against those who speak badly about Russia.

“Is that possible? Theoretically, that’s possible,” he said.

US intelligence agencies say Russian spies hacked into a wide range of institutions and agencies during the US election campaign. They have accused two Kremlin spy agencies – the GRU and the FSB – of hacking Democratic party emails and giving them to the website WikiLeaks.

The Kremlin’s goal was to damage Hillary Clinton’s presidential chances and to help those of Donald Trump, the agencies said. WikiLeaks dumped the hacked emails online in two releases last July and October.