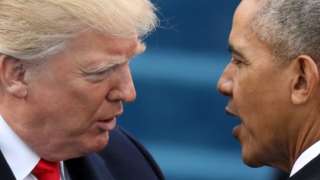 A US senator has warned he will use a court order to force the FBI to say whether Barack Obama wiretapped President Donald Trump’s phones.

Senator Lindsey Graham said Congress would “flex its muscle” if FBI director James Comey did not meet its requests.

The president has made unsubstantiated claims that his predecessor tapped his phones during the 2016 election campaign.

Mr Graham also wants the FBI to confirm if there is a Trump-Russia probe.

The senator, who is leading the Senate Judiciary Committee’s investigation of allegations of Trump-Russia ties, has said he would issue a subpoena to force Mr Comey to submit details on this and on the alleged wiretapping.

Mr Comey promised on Wednesday to provide answers in a classified briefing.

And he threatened to hold up Mr Trump’s nominee for deputy attorney general, Rod J Rosenstein, until “Congress is provided with the information to finally clear the air as to whether there was ever a [wiretapping] warrant issued against the Trump campaign”.

Despite repeated requests, the White House has not given any evidence for the claim, but asked Congress to examine the allegation as part of an investigation into alleged Russian meddling in last year’s election.