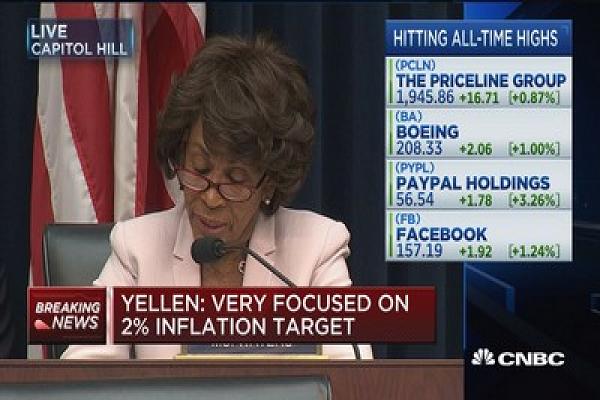 The Federal Reserve could scale back on its expected pace of interest rate hikes if inflation continues to be soft, Chair Janet Yellen told Congress.

Under questioning over why the central bank remains committed to normalizing policy even as price and wage pressures remain muted, Yellen said the Fed is aware of the softness in data and will react if necessary.

“It’s something that we’re watching very closely considering risks around the inflation outlook,” Yellen said in her semiannual remarks on Capitol Hill. “To my mind, a prudent course is to make some adjustments [in rates] as long as our forecast is that we’re heading back to 2 percent.”

Officials have indicated that they plan to keep hiking rates on a slow, steady course until the target funds rate gets back to a more normal level after years of staying at historic lows.

But questions have arisen lately that the central bank may be raising at the wrong time as economic growth remains soft and inflation holds around 1.4 percent.

Earlier in the question-and-answer session, Yellen said the Fed is not considering reevaluating its 2 percent target. However, she said that doesn’t mean the Fed won’t pause on rate hikes.

“Monetary policy is not on a pre-set course,” she said. “We’re watching it very closely and stand ready to adjust our policy if it appears that the inflation undershoot will be persistent.”

The Fed currently has the target for its benchmark funds rate at 1 percent to 1.25 percent, after coming off the near-zero rate that persisted until December 2015. Markets figure about a 52 percent chance that the Fed will hike again before the end of the year and will start unwinding its $4.5 trillion bond portfolio, most of which was accumulated as it tried to stimulate the economy after the financial crisis.