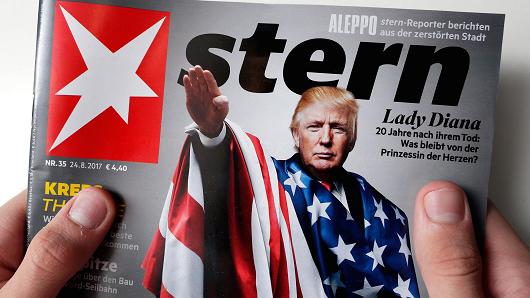 Stern magazine’s illustration is part of a cover story headlined “Sein Kampf,” which translates as “His Struggle” and is a play on Adolf Hitler’s infamous “Mein Kampf.”

Los Angeles-based Simon Wiesenthal Center says it’s been “outspoken in criticizing President Trump for failing to make a distinction between Nazis and KKK protesters and those who opposed them.” But it said “the depiction of the president as a latter-day Hitler by a major German publication is untrue and beyond the pale.”

It says “Germans must surely know that by misappropriating” Nazi symbols “they belittle and becloud” past crimes.